Super Power Training Simulator (SPTS) has a multitude of different places through a humongous map. At the beginning of the game, exploration can take a long time and is very limited, due to your lack of power to do so. There are many places of training, but also secret places or what seems to be inaccessible. Exploring the map becomes much easier once some skills are unlocked, or more specifically, when flying and teleportation are unlocked. Especially for places such as the space or the cloud which has a crystal for training FS. 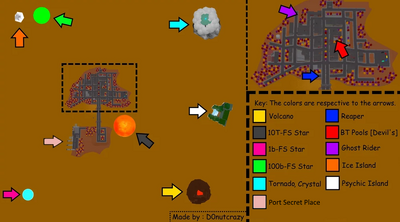 ( Please note that this map is not 100% accurate and does not have the Devil's Secret Training area on it. You can find it in a building with a pumpkin above the front door.)

Unlike training places, there are many places on the map that are only there for exploration, or to accentuate the RP (role play) side of the game. These places are sometimes very easy to access, others are a tad more complicated to reach, or to find.

Retrieved from "https://roblox-super-power-training-simulator.fandom.com/wiki/Places?oldid=17825"
Community content is available under CC-BY-SA unless otherwise noted.